Well, I guess I should have waited one more day to make that post about some new models coming. Metal Earth has added a new variation of the Willys jeep to the coming soon. This ICONX model is titled Willys Overland, and appears very similar to the Willys MB Jeep. At the same time, some new photos have been added for the Space Shuttle Discovery. But first, let’s see how this new Willys compares to the existing one (I hope this plugin works!): 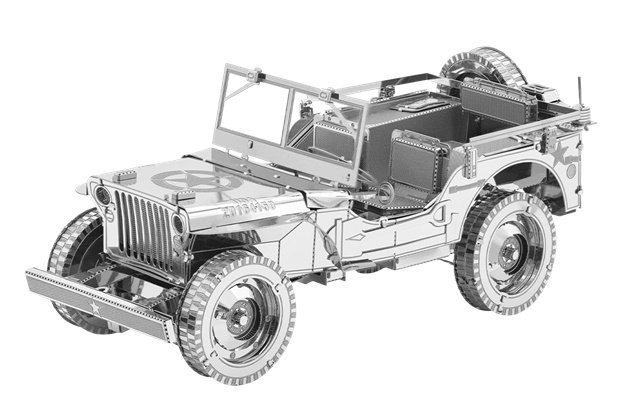 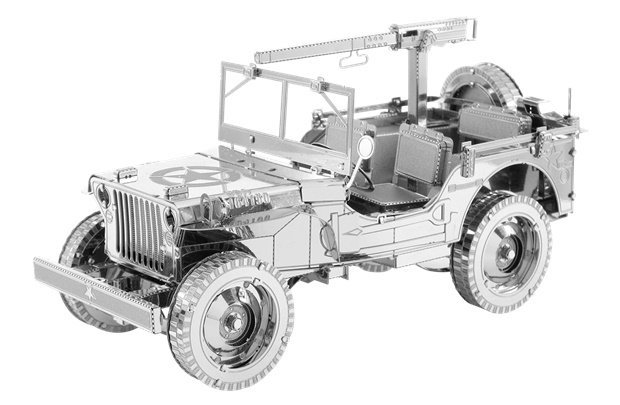 EDIT: As pointed out in the comments, it looks like the Willys MB Jeep is now in “Retired” status and the Humvee is in “Retiring”. I also noticed that the Black Panther model has joined the retiring section, too. I am sad.

So, as you can see, a lot of similarities there, but the proportions are a bit different (ignoring the different angles of the photos, of course), and a few little detail things have been added / removed / moved. Oh, and the giant gun is not there. There is that.

As for the Space Shuttle, I’m a bit more excited about that. The new photos finally reveal the front, which does look to have a smoother shaped nose section, but the big surprise is the extended landing gear! That’s a nice feature. I also went full-obsession and skimmed through the instructions to find out that this shuttle is not fixed to the stand, so it can easily be displayed as resting on those wheels. So yeah, I’m a bit excited about this one.

Okay, so we knew about one of the choppers already, and the other chopper is in a combined package with the robot, but let me have fun with my post titles! As always, I’m excited to get another space exploration model, so I am not disappointed at all that they have added a Mars Rover […]

Forgive me for the bad pun, but it’s who I am. If there is a pun opportunity, I am going to take it. And that means that when the model starts with the Russian components of the International Space Station, then I’m going to make a bad joke. Nevermind the fact that I didn’t actually […]

Review Build: ISS: It Has Begun

Well, I promise I didn’t steal that front Brad / AnimateOrange. I decided to start my next build, and it’s going to be a long one. And I didn’t think there was a remote chance that I would be able to finish it, much less write a blog post about it, in time for my […]